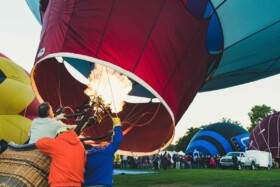 As the hot air balloon festival London 2023 wasn’t fascinating enough, there is a more important reason to participate in it. This event is basically born to support the first charity organization in London. Lord Mayor’s Appeal first aim is to stimulate a new society based on justice and equality, in which each inhabitant can have the same rights and opportunities. The idea is that of a better city for everyone that is inclusive, healthy, proactive and safe.

The event obtained an official registered trademark in December 2016. Next year, in 2017, the Balloon Regatta really went down in history with a very special take-off. During the celebration of the airport’s 30th anniversary, 26 hot air balloons took flight from the runway of London City Airport. In 2019 the hot air balloon festival London departed from Battersea Park on a sunny Sunday of June and it involved 46 hot air balloons. The aerostats and their staff fill the skyline of the city of London at 5:30. That day The Lord Mayor’s Appeal obtained the amazing amount of £76,000 breaking a new record. In four years the organization has managed to reach an incredible amount of £251,724.

There are a lot of companies very enthusiastic to be involved in this project, the participate in the Balloon Regatta with their own designed aerostat. Corporate partners who have seen their own bespoke hot air balloon flown over London and alongside the Lord Mayor’s balloon include Fortnum & Mason, Financial Times, Keltbray, Renishaw, BT, British Airways, Universal Pictures, Aberdeen Asset Management, L’Occitane, London City Airport, Riney, William Hill, Longleat, Stirling Ackroyd and more.

Why should you join the hot air balloon festival London 2023? 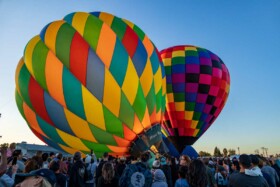 Are you seriously asking why you should participate in one of the most enchanting and incredible events in Europe and probably in the world? It’s not every day you get to admire an event as spectacular as this. A dozen of colorful and amazing balloons across one of the most suggestive cities in the world, flying over the Big Ben, Westminster, the Tower Bridge is a unique show that does not happen often. What is sure is that hot air balloon festival London 2023 is bound to get bigger and bigger. In fact each year more and more people decide to visit London on the occasion of the Lord Mayor’s Hot Air Balloon Regatta.

It is important to check the website of the event. Several dates will be shown but the event will only happen on one of the dates. If the first date is cancelled because of bad weather conditions then it will roll on to the next date.

If you liked this article and you are interested in flying in an aerostat or simply admire it taming the sky, you should take a look at our article Balloon Festival 2023. It is a very interesting overview of the most important hot air balloon festival all over the world. What are you waiting for? Are you ready to enjoy the journey?